This is a high score save and freeplay (optional) for the classic driving game Turbo from Sega. Now here is a game that really needs the scores saved! Wouldn't it be nice to turn on your game and see the top five scores proudly displayed on those LED displays? Here's what it looks like on my Turbo mini: 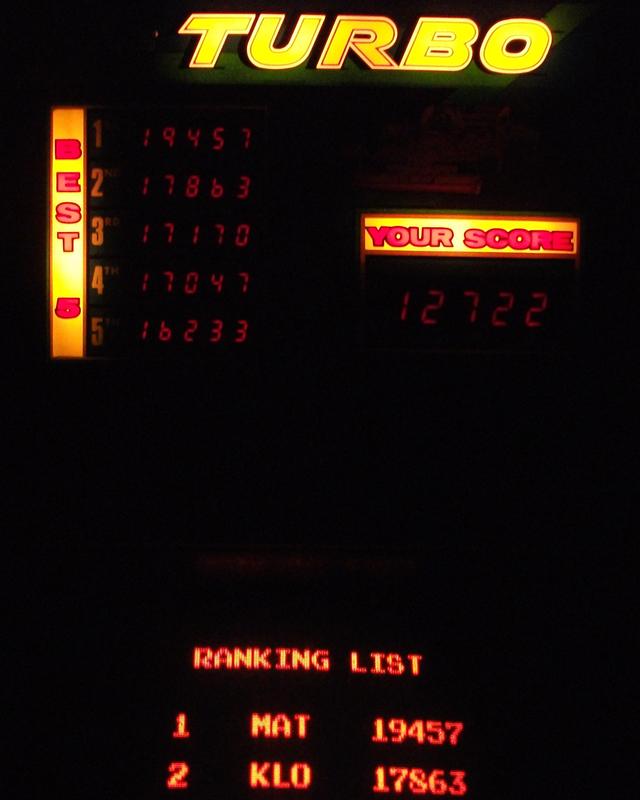 In addition to the "BEST 5" scores and the last game score on the LED displays, the top 10 scores with initials are also saved. These are displayed on the "RANKING LIST" during attract mode.

I have also implemented a freeplay version that supports full attract mode. This freeplay version is not dipswitch selectable, so it disables all coinage options. So when ordering you will need to specify whether you want the high score save with freeplay, or the version that is just high score save (for those who prefer to run their games on quarters/tokens). If you only want freeplay, you can just install the single replacement ROM (it will detect that a non-volatile RAM is not installed and reset the score table on boot).

For the score save, you'll need to change one ROM and replace one RAM chip with a non-volatile RAM. The RAM chip you need to replace is unlikely to be socketed, so you'll have to remove the RAM and install a socket for the new NVRAM. If you don't have the soldering skills to do this, please find someone who does to do it for you. An experienced tech can do the job in under 10 minutes. You perform these modifications AT YOUR OWN RISK!!!

This high score save and freeplay is currently only supported on the unencrypted ROM set. [Update:1/25/15] ENCRYPTED SET NOW SUPPORTED! Details below. The unencrypted board can be identified by the labels on the three main code EPROMs on the CPU board (the top board). They will have the labels "EPR-1513", "EPR-1514", and "EPR-1515", and nearby will be a normal Z80 CPU.
The encrypted board is easily identified by the large metal module that is plugged into the CPU socket: 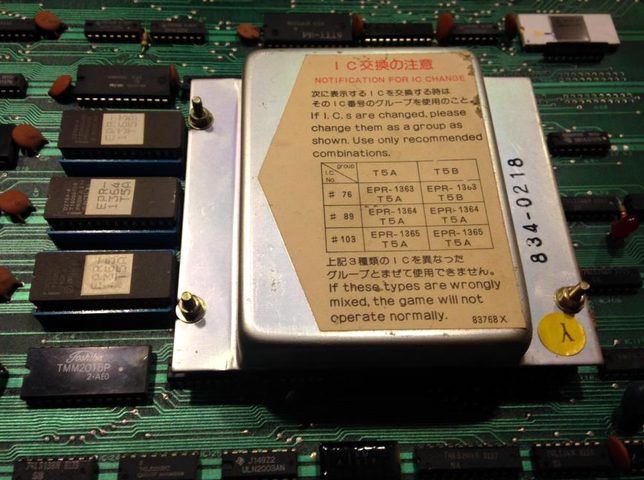 There are two known encrypted ROM sets that use the 834-0218 CPU module pictured above. The early version has EPROMs labelled "EPR-1262", "EPR-1263", and "EPR-1264". The later version is labelled "EPR-1363", "EPR-1364", and "EPR-1365" (with "T5A" and "T5B" variants). I have created a version of the high score save and freeplay based on this code (so it replaces "EPR-1363"). If your board has the early version you will have to upgrade all three EPROMs so you are running the later code.
A different encryption module (undocumented up to this point) has also popped up. It is stamped with the part number 834-0128 (note that the number is very similar to that of the other module). For the examples I have seen, this module does not have the instruction sticker on it (as pictured above, with the Japanese writing), just 2 or 3 round colored stickers. The EPROMs that go along with this module are also plainly labelled (no "EPR-", just numbers like "1363").
If you are unsure of what version you have, just send me a picture of your board that clearly shows the module and the EPROM labels, and we will figure out what you need. 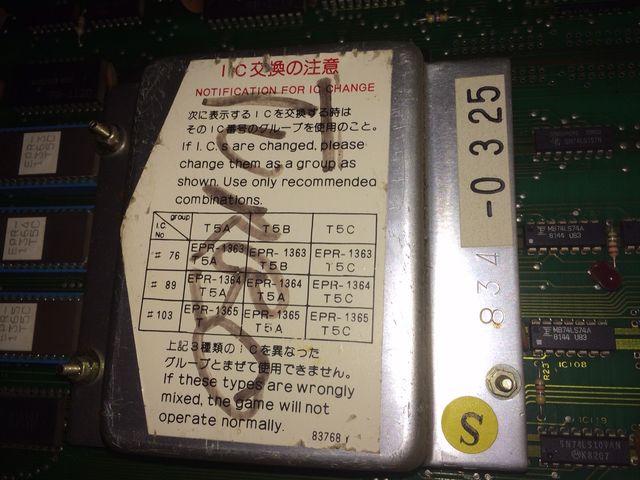 While the part numbers on these modules differ, I believe their functionality remains the same. That is, they are all capable of running the same code. So the bottom line is, regardless of what encryption module you have, I have a score-save/freeplay solution for you. If the version of your code ROMs is questionable, the safest approach is to replace all three EPROMs (rather than just the one). See the Kits section below for pricing on this new option.

Another option for those with encryption modules is to convert your board to run the unencrypted set. You just have to remove the encryption module and replace it with a normal Z80B CPU, then install the unencrypted EPROMs EPR-1513, EPR-1514, and EPR-1515 (a new EPR-1513 comes with the high score save, so you only need two more). The rest of the board is identical.

In addition to the usual code mods to preserve the RAM area containing the high scores, some new routines had to be written to save the initials since they are being stored in a different area than the scores and LED display data (outside of the physical RAM chip that we are replacing with a NVRAM). The new routines back up and restore the top 10 players' initials to a previously unused area within our NVRAM. That way we can keep the board mods to just a single NVRAM. All code modifications were also confined to a single EPROM to keep kit cost to a minimum. No new or modified code runs during a game, so gameplay is completely unaffected.

For freeplay, I made it so that the Start light is on solid when attract mode is running and turns off when playing the game. The light will turn back on just as the game ends. I figured that if it were blinking all the time it would get annoying.

To reset the high score table, first go into Test mode (the Test button is located on the panel with the volume knobs, accessed through the coin door). The first screen is the ROM test results (I've patched the checksum of the modified ROM so it will properly test). Press the Test button again to advance to the next screen, which is the RAM test. At this point your scores have been wiped clean. You can either turn the game off and then back on, or press the Test button repeatedly to advance through the rest of test mode and return to game mode. On boot I detect the corrupt score table and reset all the data. To indicate that a reset has been successful, the top five LED displays will display all zeroes ("00000" on each). The displays will revert back to normal once you finish a game. 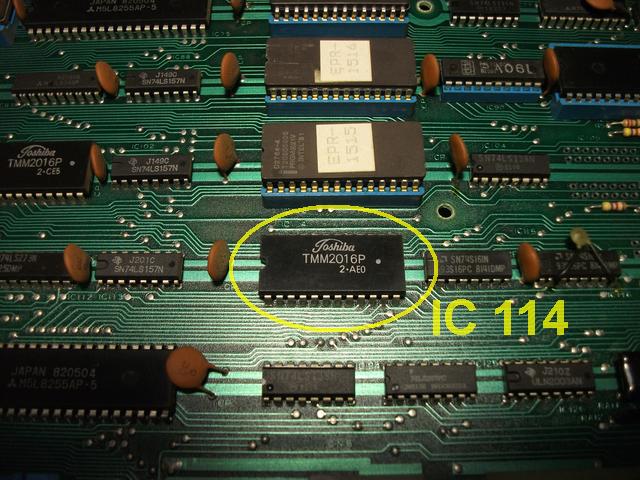 1) The 2K static RAM (a TMM2016 in the picture above, but it may be an MSM2128 or any other 6116-type SRAM) at location IC 114 on the CPU board (top board in the stack) needs to be replaced with a non-volatile memory. If that chip happens to be socketed then this step will be a breeze; just pop out the RAM and plug in the NVRAM. If not, then you'll have to remove the chip and install a socket. For the NVRAM you could use a battery-backed SRAM like the Dallas DS1220 or the ST M48Z02 (or M48Z12). 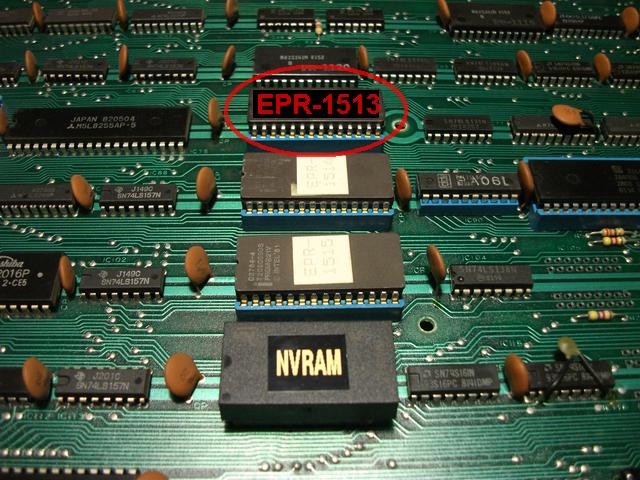 Price is $32 shipped in the US (international shipping available at additional cost).
For those with encrypted versions requiring all three code EPROMs to be replaced, the price is $40 shipped.
Please email me to check availability before sending money. Please remember to specify whether you want the freeplay version or the version that just saves the scores, and if it is for an unencrypted or encrypted board set.